This article introduces the performance comparison between Apache APISIX and Envoy under certain conditions. In general, APISIX is slightly better than Envoy in terms of response latency and QPS, and APISIX has more advantages than Enovy when multiple worker processes are enabled due to the collaborative approach of NGINX in high concurrency scenarios. The performance and latency of APISIX makes it a massive throughput capability in handling north-south traffic.

I learned about Envoy at the CNCF technology sharing session and did performance tests on Apache APISIX and Envoy after the session.

At a technical sharing session organized by CNCF, I heard about Envoy for the first time, and the guest speaker talked a lot about it, but all I can recall is a particularly novel concept “communication bus”. This is how the official website describes it.

In other words, Envoy is to solve the Server Mesh field and the birth of L7 proxy software. I found a diagram online. My understanding of Envoy is probably the following deployment architecture (please correct me if I am wrong).

Since it is a proxy software for L7, as an experienced user in the OpenResty community for many years, naturally I can’t help but use it to engage in comparison.

The object we chose to test is Apache APISIX, which is an API gateway based on OpenResty implementation. (In fact, it is also an L7 proxy and then added routing, authentication, flow restriction, dynamic upstream, and other features)

Why did I choose it? Because once I heard about the great routing implementation of this product during a community share. Since our business routing system is in a mess, I downloaded the source code of Apache APISIX and found that it is an awesome API gateway, beating all similar products I’ve seen, so I was impressed by it!

Let’s get started, first we go to the official website to find the most versions of two products: Apache APISIX 1.5 and Envoy 1.14 (the latest version at the time of writing this article).

We built an upstream server with NGINX, configured it with 2 workers, and received a request to directly answer 4k content, with the following reference configuration:

First we find the Apache APISIX Getting Started configuration guide and we add a route to /hello with the following configuration:

Note that the proxy_cache and proxy_mirror plugins are not started here, as Envoy does not have similar functionality.

Then we add a route to Envoy by referring to the official Envoy pressure test guide:

The generate_request_id, dynamic_stats and circuit_breakers sections above are turned on by default inside Envoy, but they are not used in this compression test and need to be turned off explicitly or set to oversize thresholds to improve performance (Can someone explain to me why this is so complicated to configure...).

Note: For NGINX called worker number, Envoy is concurrent, in order to unify the number of workers called after.

Note: The raw data is publicly available at gist preview. 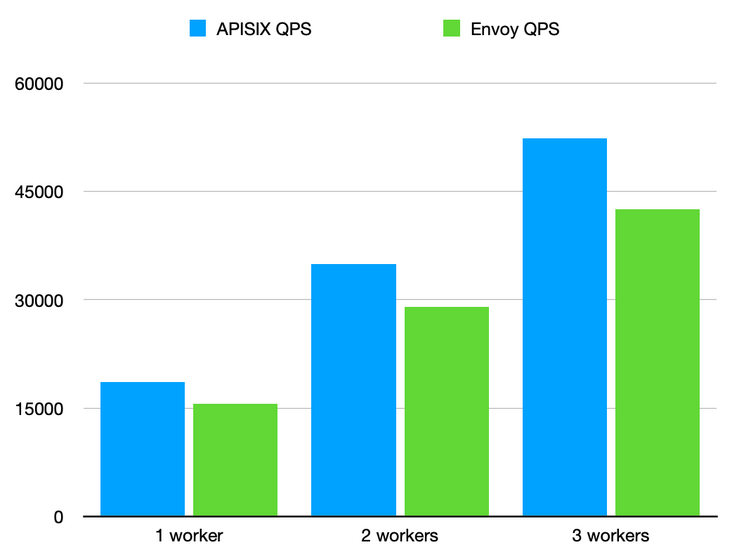 We can see that the difference between the two metrics in the single-worker thread|process mode, QPS and Latency is not large, but with the increase in the number of threads|processes their gap is gradually enlarged, here I analyze that there may be two reasons, NGINX in the high concurrency scenario with multiple workers and the system IO model for interaction is not more advantageous, on the other hand, also On the other hand, NGINX itself may be more “stingy” in terms of memory and CPU usage in its implementation, so that the cumulative performance advantage can be evaluated in detail later.