In this article, you can understand how iQIYI's technical team updates and integrates the company structure based on Apache APISIX gateway to create a brand-new gateway service.

iQIYI has developed a gateway-skywalker, it is based on the secondary development of Kong, the current traffic is also relatively large, the daily peak of the gateway stock business million QPS, the number of API routes tens of thousands. But the product’s shortcomings began to show up in the wake of its use.

After taking over the project this year, we started to do some research on gateway products in the light of the problems and dilemmas mentioned above, and then we found Apache APISIX.

Before choosing Apache APISIX, the iqiyi platform was already using Kong, but it was later abandoned.

Why Give Up Kong#

Kong uses PostgreSQL to store its information, which is obviously not a good way. We also looked at the performance of Apache APISIX compared to Kong in the course of our research, and it’s amazing that Apache Apisix is 10 times better than Kong in terms of performance optimization. We also compared some of the major gateway products, Apache APISIX’s response latency is more than 50% lower than other gateways, and Apache APISIX can still run stably when the CPU reaches more than 70% .

We also found out that Apache APISIX, like Kong, is based on the OpenResty technology, so the cost of technology migration is relatively low. And Apache APISIX is very adaptable and can be easily deployed in a variety of environments, including cloud computing platforms.

We also saw that Apache APISIX was very active throughout the open source project, handled the issues very quickly, and the cloud native architecture of the project was in line with our follow up plans, so we chose Apache APISIX.

Architecture Based on Apache APISIX#

About the gateway this piece, simple from the control surface and the data surface introduce. 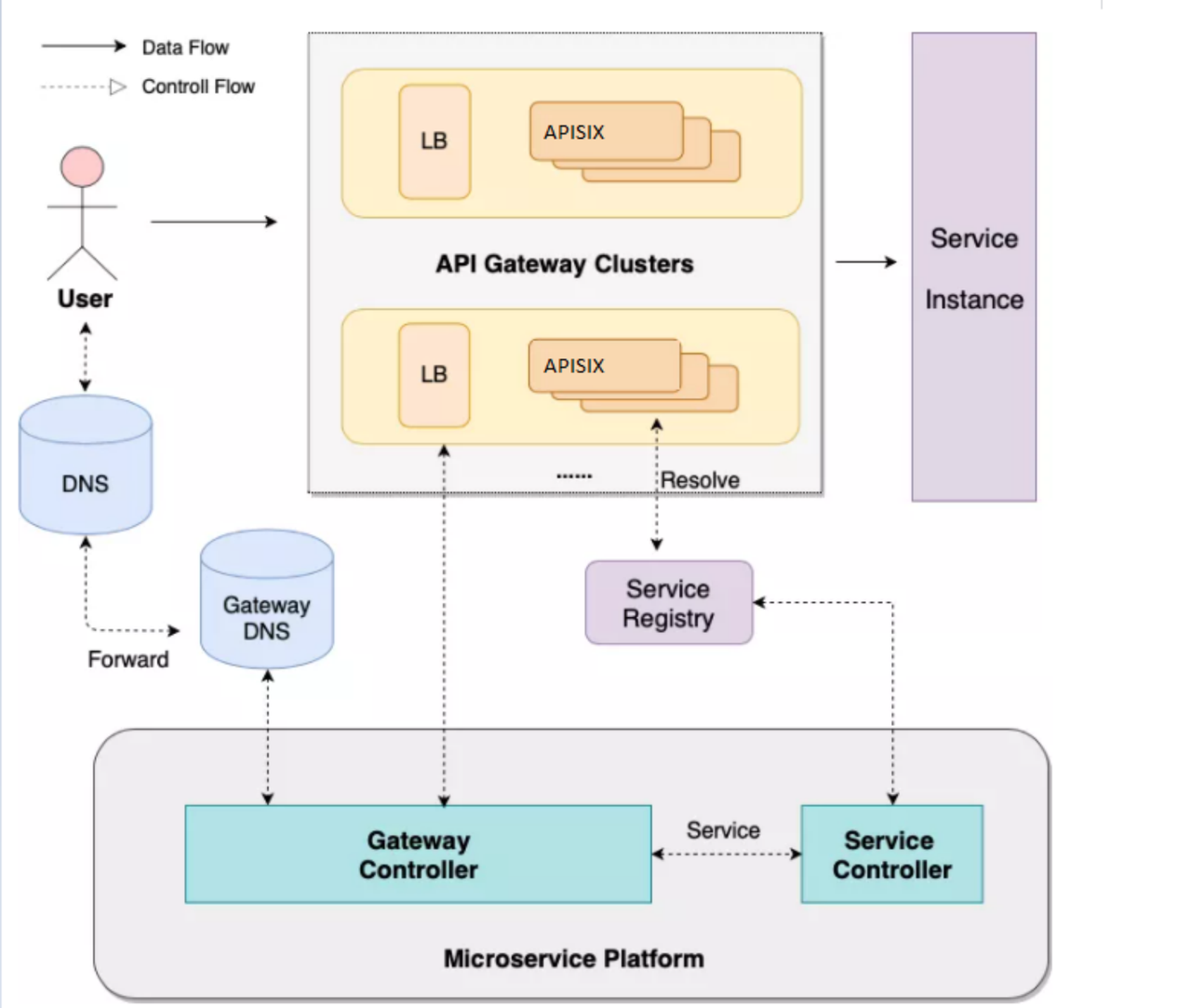 The data plane is mainly oriented to the front-end users, and the whole architecture from LB to Gateway is multi-location and multi-link disaster deployment.

From the perspective of control surface, because of the multi-cluster composition, there will be a micro-service platform to do cluster management and service management. Microservice platforms allow users to experience services as one-stop-shops that expose them to immediate use without having to submit a work order. The back end of the control panel will have Gateway Controller, which controls the creation of all apis, plug-ins, and related configurations, and Service Controller, which controls Service registration and health checks.

At present, the API architecture based on Apache APISIX has realized some basic functions, such as current limiting, authentication, alarm, monitoring and so on.

First is the HTTPS section, iQIYI for security reasons, certificates and keys are not stored on the gateway machine, will be placed on a dedicated remote server. We didn’t support this when we used Kong, we used the prefix Nginx to do HTTPS Offload, and after the migration to Apache APISIX, we implemented this feature on Apache APISIX, which is a layer less forwarding over the link.

The monitoring feature is currently implemented using the Apache APISIX plug-in Prometheus, and the metrics data will interface directly with the company’s monitoring system. Logging and call chain analysis is also supported through Apache APISIX.

When the instance changes, the corresponding node is first unlogged from Consul and a request to update the DNS cache is sent to the gateway through the API Gateway Controller. After the cache update is successful, the Controller then feeds back to the QAE platform to stop the associated back-end application node and avoid reforwarding traffic to the offline node.

It provides multi-local access, disaster preparedness and handoff capability for business directly, and also supports user-defined resolution routing. For the user’s own fault-cut flow, blue-green deployment, gray-scale publishing needs, users can use the uuid domain name to customize the resolution of routing configuration, but also to support the back-end service discovery custom scheduling.

As we mentioned earlier, at the business level we have business proximity and disaster preparedness requirements for large volumes of traffic, large clusters, and a wide audience of clients.

For disaster preparedness, in addition to multi-link backup, but also consider multi-level multi-node problem, fault node closer to the client, the greater the impact of business and traffic.

During our migration practice from Kong to Apache APISIX, we addressed and optimized some known architectural issues, but also encountered some new ones.

Result 1: SNI Compatibility Issues Not Supported in The Front End Were Resolved#

Most of the frontend is now supported for SNI, but you’ll also encounter a few frontend that won’t pass the hostname during SSL. At present, we have done a compatibility for this situation, using port matching method to obtain the relevant certificates.

Result 2: A Large Number of API Routing Matching Problems Have Been Optimized#

As I said before, we currently have more than 9,000 API services running directly online, and may increase in the future. In order to solve this problem, we made some performance optimization, according to the API to decide whether to match the domain name or the path first.

Result 3: The Limitation of ETCD Interface Is Solved#

After accessing Apache APISIX, the ETCD interface limitation has also been resolved and the 4M limit has now been lifted.

Result 4: Performance Issues Optimized for The Number of ETCD Connections#

Currently, every worker at Apache APISIX is connected to the ETCD, and every listening directory is going to make a connection. For example, a physical machine is 80core, with 10 listening directories and 800 connections on a single gateway server. With a gateway cluster of 10,8,000 connections is a lot of pressure on the ETCD. The optimization is to take one worker and listen to a limited set of necessary directories and share the information with the rest of the workers.

In addition to the above problems, there are also a number of issues are being optimized.

We hope that in future development updates Apache APISIX will not only support more functionality, but also maintain performance efficiency and stability over time.